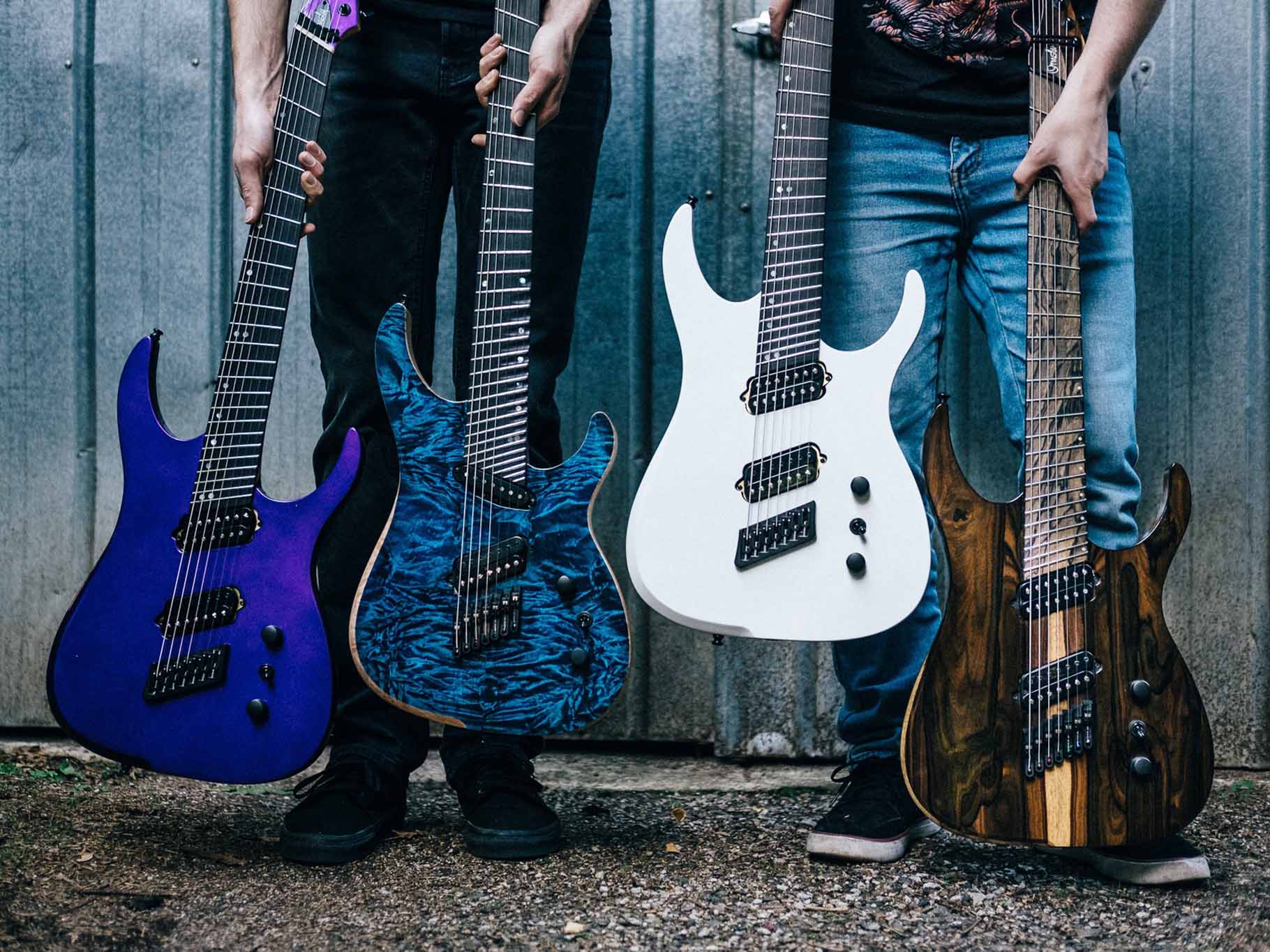 WHAT IS A MULTISCALE?

THE HISTORY OF ORMSBY + MULTISCALES

Each model has been meticulously developed so that our players have the perfect mix of tone from the woods and electronics used, along with ergonomic shaping to ensure maximum comfort when playing. We have also spent time developing our own custom hardware and pickups to give our players a quality and sound that they won’t be able to find anywhere else.

The technology that really sets the Ormsby brand apart is the use of our ‘Multiscale’ fanned fretboard which is a true piece of guitar innovation.
During the early days of Perry designing custom ordered models, he encountered a string tension issue that could be improved upon rather than tolerated and a whole new concept was born which put Ormsby Guitars on the map. In theory, implementing fanned frets would place the guitar’s frets on a calculated angle to give each string a different scale length; a longer scale length on the lower strings and a shorter scale length on the higher strings. The idea was designed and refined to what we still use on our guitars today and a whole new concept was brought to the industry.

Fanned frets work by giving each string the optimal length to suit the pitch of the string. On a regular guitar, a thicker gauge string would be required at a lower tuning to reach deep lows, however, this opens the door to tension issues in order to achieve that deeper sound. With a fanned fret guitar, the lower strings don’t need to have thicker gauge strings to keep the tension tight. The longer string length helps keep the string tension at where it feels best to play. Essentially, fanned frets enable a strengthened tone on the lower strings by giving them a longer string length, whilst also enabling a high string that can be tuned higher than what is typically possible on a conventional guitar as it has a shorter vibrating length. This also means there is a lesser chance of string breakage caused by the tension usually required to tune higher. When looking for a Multiscale guitar, you are given the scale length for the lowest string followed by the highest string, for example our six string Mutliscale length reads as 25.5" - 27.5". On a typical Ormsby multiscale, the neutral point can be found at the 9th fret.

The design and development of this fanned fretboard has paved the way for fellow guitar manufacturers with 8 of the 10 largest global brands using a our multiscale system as inspiration for their own models, however, it’s only in an Ormsby that you can find the original multiscale paired with a customised, angled bridge and pickups to give our players exceptional and precise tone.

"The whole Multiscale guitar design came about after talking with guitarists who were looking for the ultimate in tone. I'd built some baritones, but tuned as regular guitars. The tone was huge. There was a downside though; the extended scale length meant that soloing was more difficult.

One thing that always fascinated me, was the fact that most musical instruments (drums, pipe organs, pianos, horns, etc) all used a large 'object' for the lower notes. A piano string is considerably longer for the lower notes, than those used for the higher pitches. A kick drum is physically larger than a snare, and the same goes for cymbals, etc. I started looking at how a guitar could be adapted to suit. In the beginning, it was two totally different scale lengths, the E/A/D strings had one, and the G/B/E had another. However, this would be impossible to play.

Then one day it hit me, if I used the centreline of the neck as the basis of a scale length, and made the frets splay out in a fanned direction, it could work. That night, I discovered an instrument called an opharion. It was perfect. Exactly what I'd imagined. From there, I started designing."

"Knowing how even the best guitars are still out of tune with themselves, I worked out which frets to move, or 'misplace' to increase accuracy. I studied guitarists and how they move on stage, to develop the best angles for the nut and bridge. I calculated the best position for the 'straight' fret, based on how most guitarist play when sitting or standing. It was coming together pretty well, and I was proud of what I'd discovered.

Once the design was finalized, I started showing people. No one understood it. For years I explained the theory, but no one was interested. Then one day, someone said "oh, they look like they are fanned frets", which sent me on a discovery of the new term. I found an instrument maker in the USA, who was making 'fanned fret' guitars, although he wasn't angling the bridge, nor the pickups. I continued with designing the Multiscale. It would need specific hardware, the headstock had to be angled differently, the pickups needed to be custom built, and a whole bunch of other little bits and pieces.

The whole thing got put on the back burner for a few years until I found a client brave enough to want to try it out. Once we signed off on the design, it all happened very quickly, about 15 days in fact. It was amazing. So natural to play. The tone was unbelievable. The sustain! I was absolutely thrilled to pieces with how it played.

For a guitar or bass, the fanned arrangement of the Multiscale fretboard creates scale lengths for each individual string. We generally call this the "spread".
For Ormsby Guitars, the general spread is as follows:

Due to the increased scale length on the bass side, the tension of the strings increases. We recommend you try dropping a gauge on the bottom end, for example, if you usually use 9-46's,
try 9-42's.

The sizing guide above is our most commonly used scale, however since it's creation we have introduced additional Multiscales including that which allows for standard hardware to be used and places the 'neutral' fret at the bridge. Scale length will always be listed on each of products in the specs.

When either seated or standing, the natural position for most guitarists 'at rest' aligns with the 9th fret. We call this the 'straight fret'. Moving this straight fret position, to let's say, the 12th fret, causes issues towards the nut, or moving it to the 8th, 7th or even 6th fret, increases the angle of the bridge, and therefore the pickup. Both not really a good idea.

The nut angle is aligned with the natural flow of your forearm AND your unbent wrist. Try this; grab your guitar, and play an F bar chord. You'll notice your wrist is bent nearly to the full extent of its movement, stretching tendons. With a Multiscale, this is not the case. Your wrist stays straight (although some players still play the 'old way') which in turn means you no longer stretch those tendons and muscles. Player fatigue? Thing of the past!

The same theory is in place at the bridge. Stand in front of a mirror and lightly palm mute your strings at the bridge. See how you'll have to bend back in an unnatural way to palm mute more than a few strings? The Multiscale bridge is angled to suit the natural resting angle of your forearm.

Unless otherwise stated the bridges, pickups, locking nuts and machineheads that we use are custom made for us following our exact specifications.

There is one thing most people notice straight away when playing a Multiscale; The tone. This is a result of the increased tension. If you've ever put a larger set of strings on your guitar, you'll notice the tone was a little fatter. This is more due to the increase of the string tension, rather than the physical dimension of the string. There is a point of diminished return on a regular guitar - if the strings are too big, the sustain suffers. Imagine a bass string on a guitar; the string dimension has increased, the string tension has increased, but the string physically cannot vibrate for as long. A longer scale length solves this issue.

Consider a Multiscale as a normal guitar. You tune it the same. Bends are as per normal. However, intonation is more accurate. The bass side strings do not stretch as much when you hit them with a plectrum, so you don't get as much pitch increase in the initial attack of the note.

A majority of our guitars are manufactured to be Multiscale, however, we do occasionally throw in a standard scale from time to time.
For anyone who isn't well versed or is new to the concept of Multiscale guitars, they can easily be spotted by a few visual factors; the fanning of the frets and the angled placement of the pickups, which is in contrast to the perpendicular arrangement of other standard scale guitars; such as our Dragonburst Metal X pictured below. 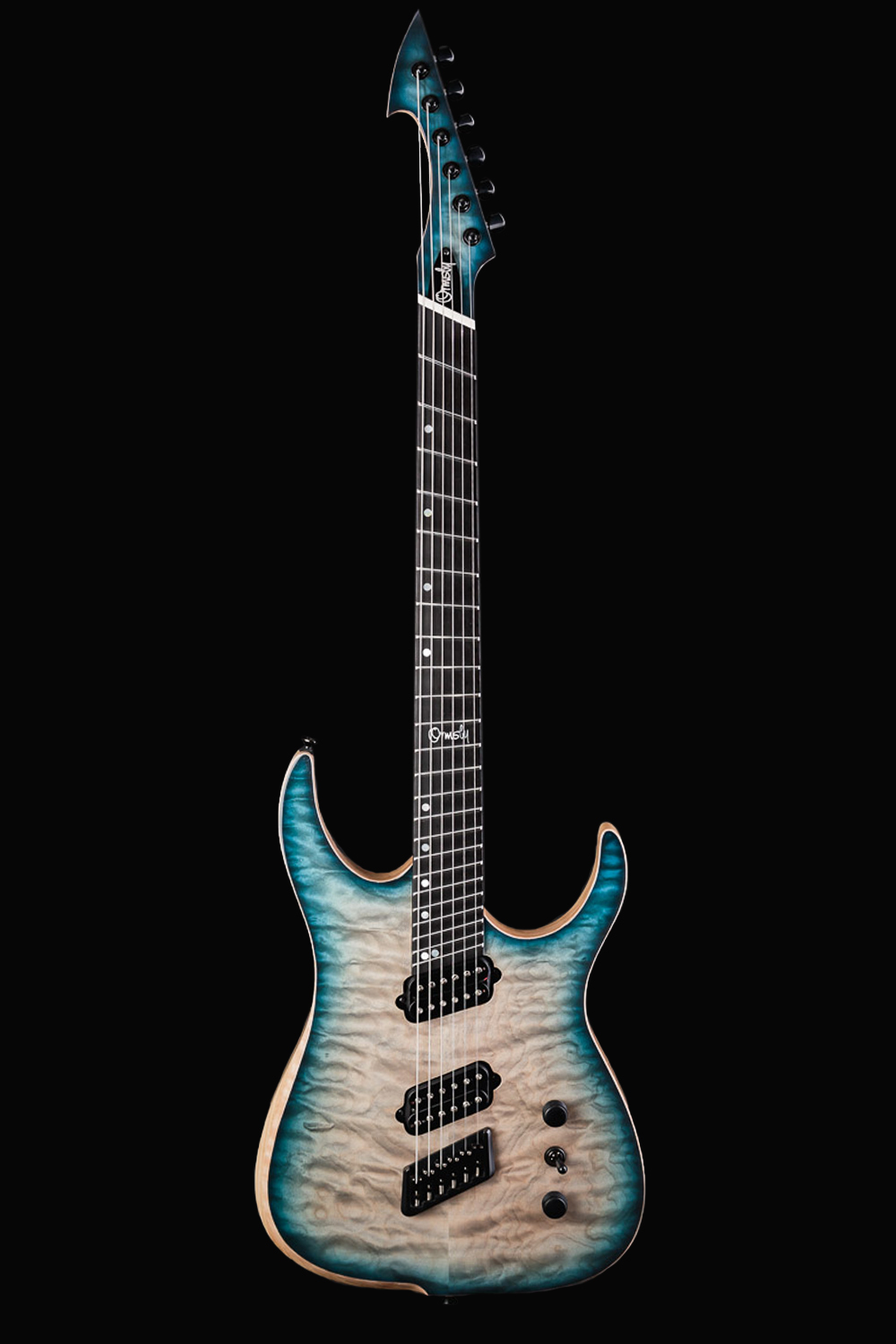 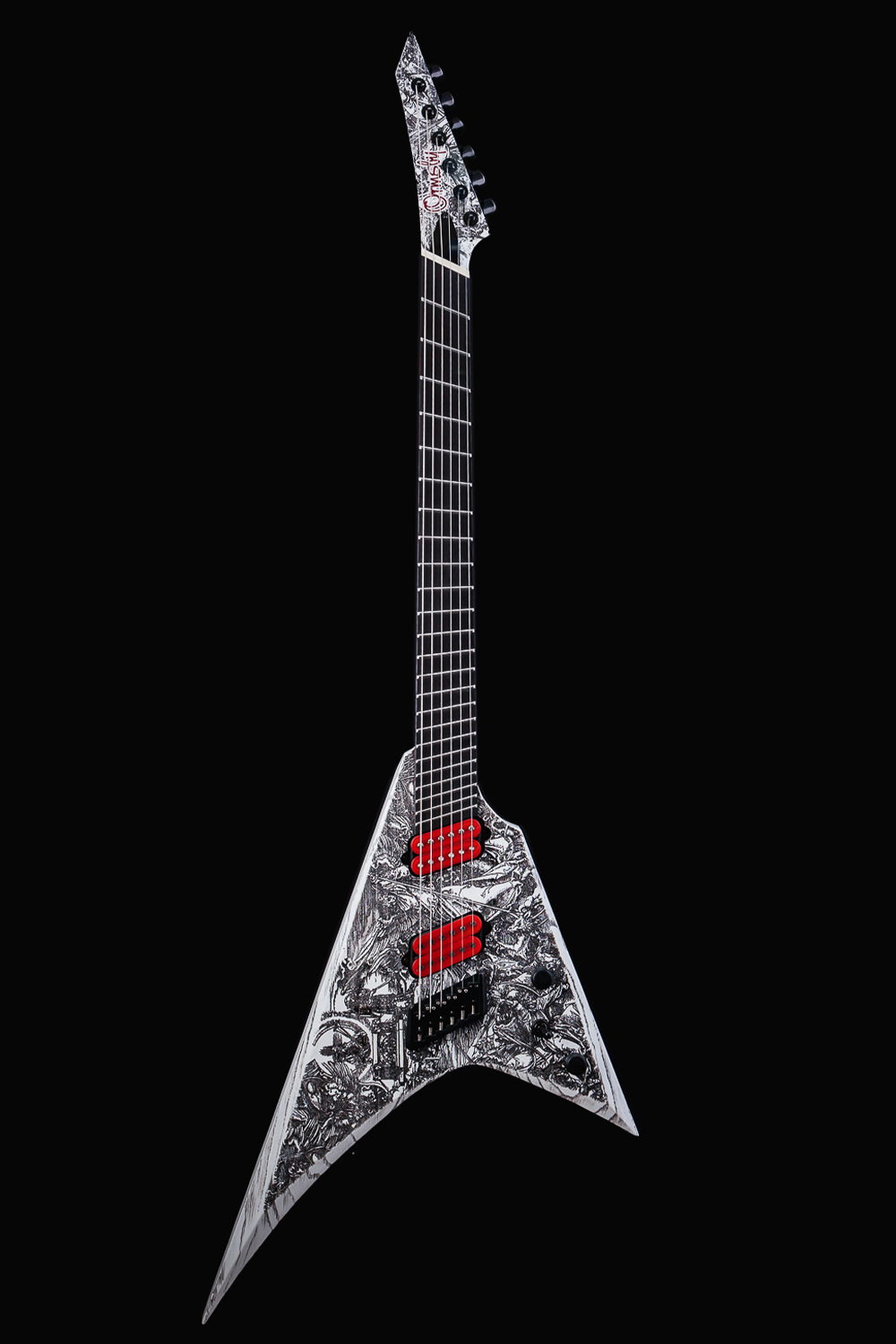 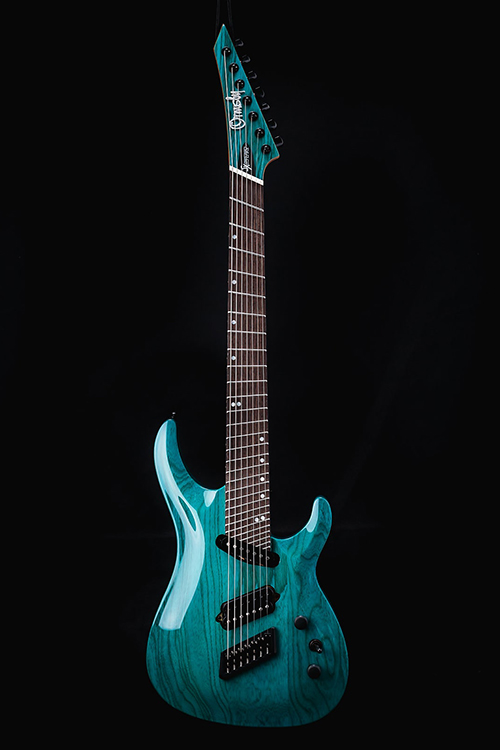 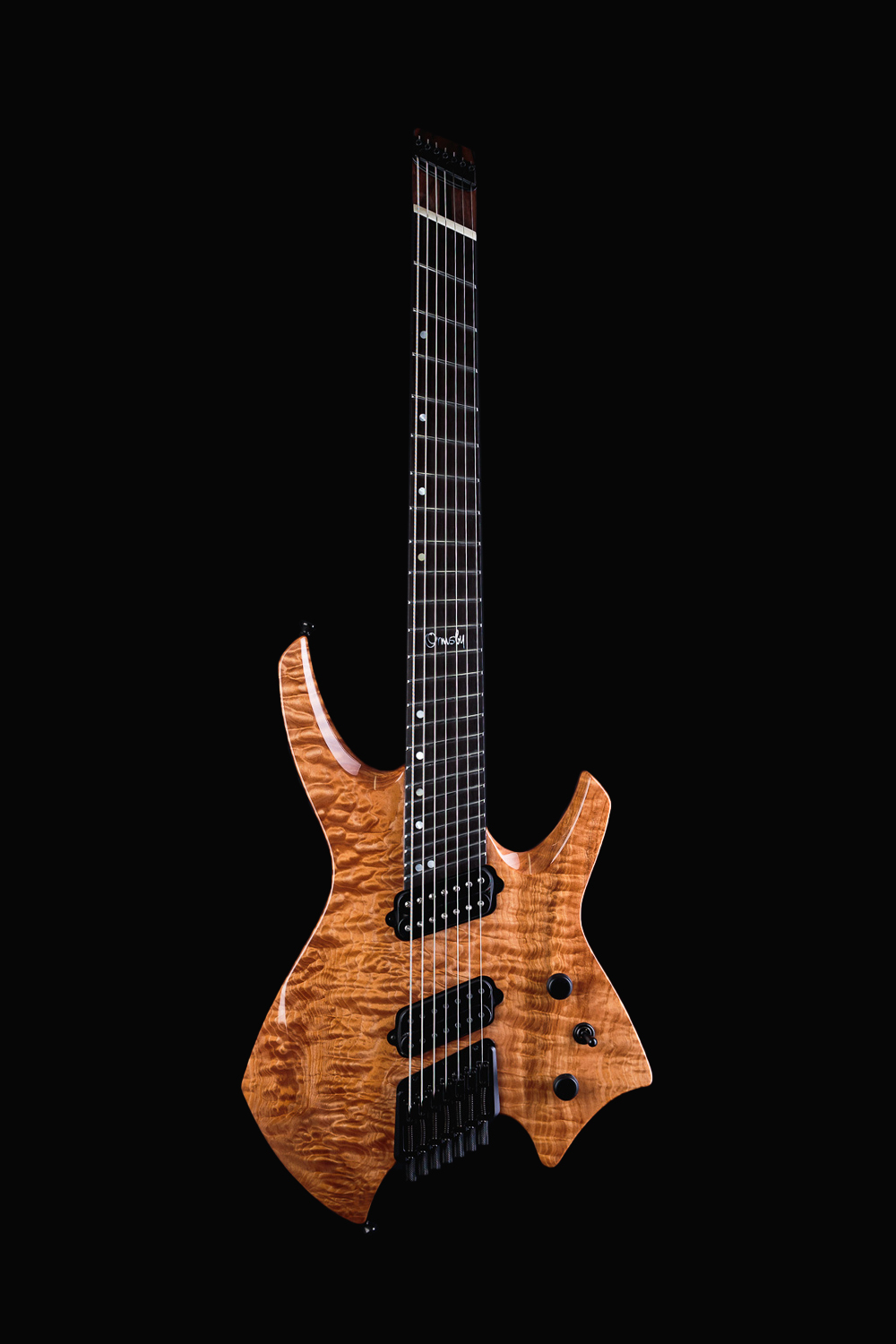